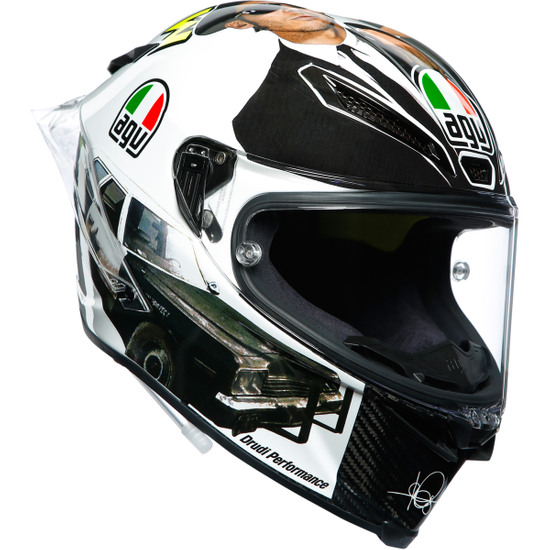 Oh dear, we have run out of this size. Shall we let you know when it’s available?

We have these similar products available

AGV Pista GP R Rossi Misano 2016 Limited Edition Helmet. The definitive race helmet designed by AGV is now even better. Outstanding improvements include the hydration system included, the metallic ventilations developed in MotoGP and the wind tunnel tested rear spoiler which improves aerodynamics and stability at high speeds. The outer shell is made 100% of 3K carbon fibre, providing lines which minimise interference with the race suit and its interior with an adjustable fit avoids seams in the more sensitive areas.

History of the design:
As the traditional marks, when Misano Saturday approaches there is always great expectation to find out what Valentino Rossi has come up with for his celebration helmet. Misano is always a special circuit 'Il Dottore' as it is very close to his home and where he receives all the warmth of his fans.

The 2016 Misano helmet honours the bond he has with his childhood friend, Alessio Salucci, better known as 'Uccio', Valentino's assistant.

With a clear reference to the film 'The Blues Brothers', on the top part Valentino and Uccio appear dressed like Dan Aykroyd and John Belushi along with the message 'Sweet home Missano', reminding us of the well-known song from the film and paying homage to the fans that fill the circuit all weekend long.

The Bluesmobile appears on both sides of the chin bar, the ancient police car used by the Blues Brothers. Also, on the rear is Rossi's classic 46 and Rossano the cat accompanied by Rossi's dogs, Cesare and Cecilia, who here are wearing the famous Rayban Wayfarer sunglasses.

Graphics full of symbolism which, without a doubt, helped Rossi fight for the race.

The AGV Pista GP R is the latest and most spectacular of the italian brand in terms of racing helmets. Its main novelties are the integrated hydration system, the spoiler, the metallic ventilations and the interior of the helmet, developed under the indications of the MotoGP riders of the brand.

Do you have a doubt about this product? Ask our community

There are no questions
about this product. Want to ask first?

There are no evaluations
in this language.